Seminole Ridge TV attended the STN (Student Television Network) National Convention for the first time and took home a win!   The convention was held in Orlando at the Rosen Plaza Hotel and Orange County Convention Center.

Junior Jezebel Perez and sophomore Cara Engh won 1st Place in the PSA competition.  Perez and Engh had to create a PSA promoting the “golden rule” in 6 hours: 3 for planning & shooting, 3 for editing. 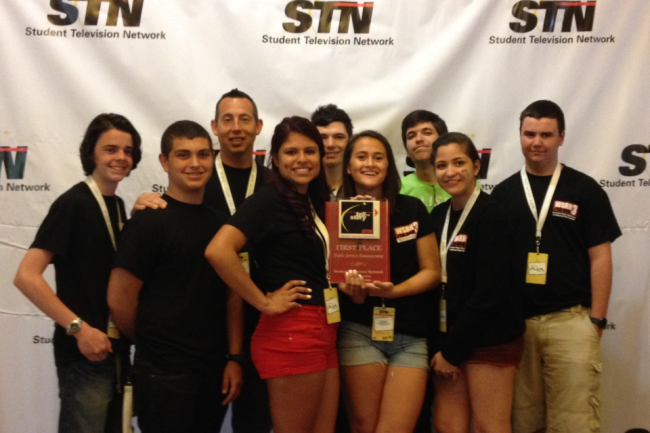 Mr. Wright and 10 students (C.J. Bates, Connor Nugent, Nataly Berdecia, Jezebel Perez, Cara Engh, Anthony Gugliotta, Andrew Garcia, Ricky Bong, Christian Menke and Nick Koenig) competed in the Sweet 16 Film Challenge which required the team to create a short film in under 16 hours.   The film had to have the title “The Big Squeeze” and feature 3 shots with an orange as a prop.

Seminole Ridge TV is now part of the NFHS Network. We are now streaming and archiving our WSRH News Daily Show and select sporting events. Click on the NFHS Network logo below to watch NOW!

Where Is Seminole Ridge?

Congrats to @bellsmartini13 @paige.kerch @ash.pellicone and Shelby Hatcher for winning their episode of @shortcutstvshow ! 🥳
Hard at work! Our package with @wptv is almost done. Don’t forgot to watch on Monday! 🎥
Excited for the opportunity to be working alongside @wptv ! Tune in January 27th at 5 p.m. to see what we’re working on!